Want to Save Time in PowerPoint? Meet the F4 Button.

Developing PowerPoint decks takes time… but probably less time than you’re spending now. Let’s fix that. We’ll start with all those functions that need to be repeated over and over. You know... creating boxes, duplicating shapes, using the same configuration of elements multiple times.

When you need to repeat your last command – no matter what it is – hit F4, “control + Y” (on a PC) or “command + Y” (on a Mac). This nifty shortcut is built into every version of PowerPoint, across all office programs. We love the F4 shortcut and soon, you will too.

In the first example below, there are three messy columns of boxes that can be lined up perfectly in three moves. First, use the marquee tool to select the boxes. Second, hit the align tool (under drawing tools on PC/under the format tab on Mac). And finally, with the marquee tool, select each other column you wish to align and hit F4 or control/command Y. Presto! Time saved! 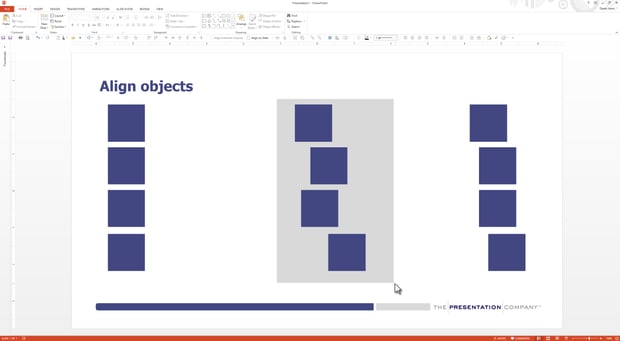 Insert slides in a flash

The second example shows how to insert many slides quickly. On the top navigation bar, you’ll find the ‘new slide’ button. Now, rather than repeating that process, press F4 (or control/command Y) as many times as you want to fill out your deck. It’s jolly useful and very little effort. Cheers!

Get more PowerPoint tips and tricks by taking our Influencing with Visuals or Presenting Data Visually workshops.

Sign up to receive news and info about TPC's services

Every day, people struggle to turn their data, facts, and ideas into a persuasive narrative. We help you do it quickly and with confidence. For two decades our workshops, consulting, and coaching have helped the world’s top brands to tell visual stories that powerfully connect with their audience.

TPC is proud to be a certified women-owned business. When you do business with TPC, you support an entire industry of diversity-based companies, which contribute over $1T to the economy.

©2020 The Presentation Company. All rights reserved.